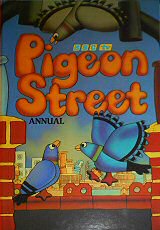 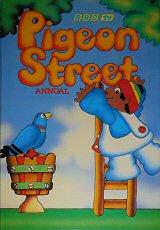 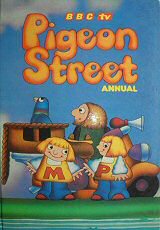 There were also a series of books available. Four are pictured above: (Left to Right)

The official video on VHS, BETAMAX and V2000 was produced in 1985 by BBC VIDEO. This video was discontinued just six months after it's initial release. The BBC currently have no plans to re-release the video.

What has to be the rarest item is a white label test pressing of a 2m 32s version of Pigeon Street theme (performed by Soulyard - one side pressed only). **Please note that this was severely mispressed and has a very tinny-distorted playback). It has a plain "bubblegum" white label with just a handwritten number (# 013) on the front with Pigeon Street scribbled on it in smudged biro. I was given this ten years ago on a school trip to BBC Pebble Mill by the person in charge of the Music Library there. I have never seen another one since - nor will I ever see one again??? --Steve May